Because Mascara is a necessity of life 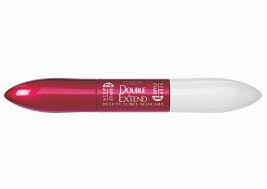 Today I'm jumping from author mode to another one of my jobs. That of a pageant coach for over 20 years. It's pageant season with high school pageants, students gearing up for Distinguished Young Woman, Miss America and Miss Teen USA so I'm fairly inundated right now.

One of the most common questions I get asked is "How do I tape my boobs?" Seriously. But I'll save that topic for another day. Another hot topic is "What's the best mascara?"

My answer...Loreal Extend in the maroon and white tube. It's the kind that adds tubes to the end of your lashes after using a white primer. You still have to use a volumnizing mascara over it because it's not enough on it's on. Sadly, I haven't found a volumnizing mascara I love. I can tell you that Loreal Butterfly Effect in the silver tube and the Loreal False Fiber lashes in the black and gold tube are not worth the money. I'm thinking of trying Cover Girl next. Maybe the one Katy Perry advertises because she's a celebrity, and you know how important it is to believe anything a celebrity says. LOL

I've used the 3D Fiber that everyone is raving about. Mom loves it. I hate it. Way too much work and clumpy thick. My lashes look better with the cheap drug store stuff versus spending $30. Dido on Lancôme. (I can say that because I worked at Lancome for a while.) Plus Loreal owns Lancôme so it's basically the same formula minus the added fragrances.

Lastly I also use Latisse a couple times a week to maintain my long lashes.Its a miracle drug. A friends gets lash extensions so she doesn't have to use mascara at all, but my research revealed it is harmful to your real lashes.

So there you have it. Beauty tip of the day. Do you have a favorite mascara?

Southern Smiles,
Casey Crow
Posted by Casey Crow at 1:00 AM No comments:

I'm a bit early for fairytales but...

...I couldn't resist posting a graphic I put together for National Tell a Fairytale Day. 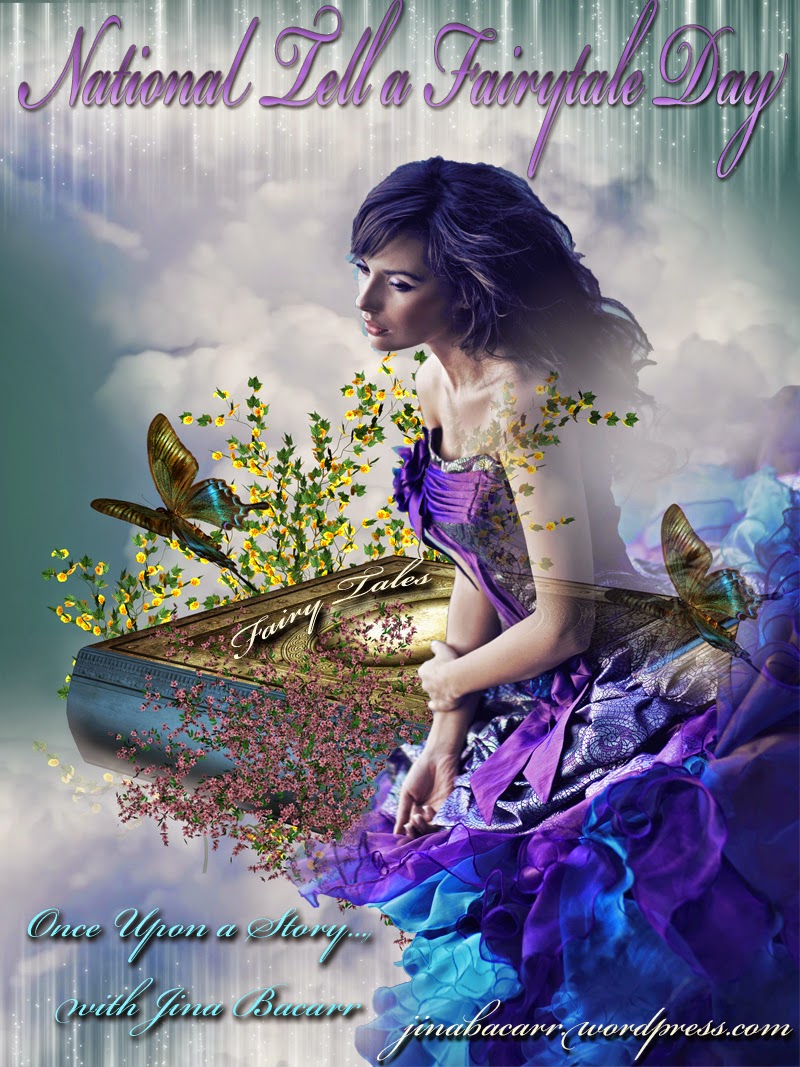 And to celebrate fairy tales, here is a video I made about The Princess and the Stilettos.

Okay, it has a Valentine's Day theme -- I'm too early for Fairytale Day and too late for Valentine's...I hope you'll forgive me.


The Princess and the Stilettos for Valentine's Day from Jina Bacarr on Vimeo.

Caveat: I'm not a reviewer. I believe it's an art form in itself, and I don't have that talent. But I'll do my best, and I'll try not to include spoilers without yelling, "Spoiler Alert!"

You have probably noticed when comparing adaptations, the book is almost always better than the movie. Having read all three books in the 50 Shades trilogy I can honestly tell you this holds true for the first book's story.

What story, you ask? The one they cut out completely to make the movie less than five hours long.
I know that cuts have to happen. Believe me, if anyone knows this, I do. I was writing screenplays before I wrote my first novel.

A movie script is roughly 120 pages long. 1 page equals 1 minute of film time. The paperback is 514 pages long. There was no mention of Anna's job. None whatsoever. If they intend to do the rest of the series (and I hope they do, because the cliffhanger they left it on was oh, so wrong...) they'll have to put that in there right away.

Without spoilers, here's my review:

What? Oh, no they didn't! Well, the casting is good. How could they leave that out? SPOILER ALERT! Anna forgot to use the safe word!  That was a hugely important detail! It might have taken 1/4 of a page...15 seconds to include that. Sheesh. 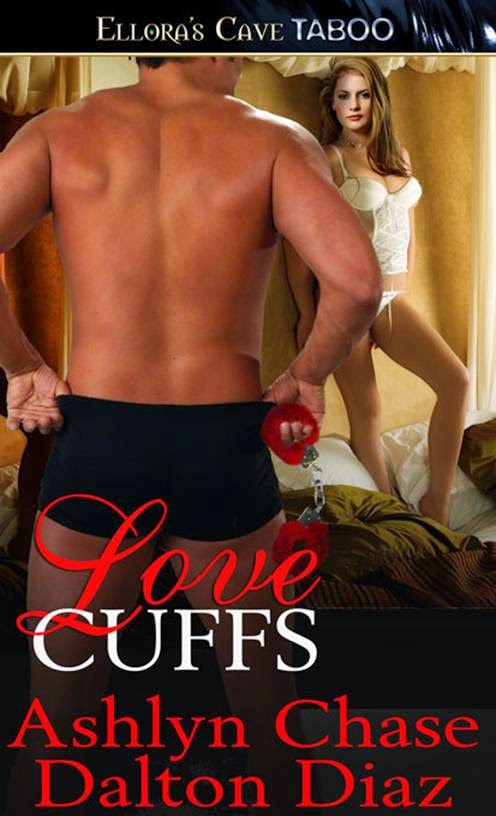 It's Mardi Gras in Mobile! Yeah, New Orleans throws a big ta-do, but since we Alabamians like to say Mobile had the first Mardi Gras, I'll be talking about how we do it up. Purple, gold and green colors are everywhere, even on the gigantic wreath on my own front door. Parades with masked revelers throwing moonpies, beads, and huge stuffed animals are held nearly every night for about three weeks. Balls with ladies in beautiful long dresses and guys in tails wearing so many beads they look like Mr. T.

On Fat Tuesday, the Knights of Revelry ladies wear spring suits and fancy hats like you see at the  Kentucky Derby. Most have on tennis shoes with those designer suits. Half the children running around wear French hand-sewn dresses and john-johns. The other half are raggamuffins with Walmart sacks filled with throws. The most serious parade goers have folding chairs, ice chests, and giant umbrellas they flip upside down to catch goodies. Plus, the bigger the umbrella, the easier for the drunk dude on a float to make the target. Folks even have those trash picker upper things to pull beads from the branches of crape mertles and enormous live oaks lining the streets. Campers fill the grassy area by the civic center for weeks on end because even if you live in Mobile, you don't go home - especially when your attending 5 to 8 balls.
I've been in the parades and watched them. The first parade I watch when I was 15. I got sprayed with mace when some doofus near me got into a fight with his buddy. Luckily, I'd ridden in the Joe Cain Children's Floral Parade earlier that day. In the middle of it, this super cute guy ran up to my float and gave ME a rose. That's my favorite Mardi Gras memory.

Earlier this week, I experienced MG as an adult, attending the Order of Venus ball with several girlfriends because who needs a better reason to wear a ballgown than a Girls Night Out?

To start a ball, the calvary makes a processional followed by the court and finally the queen (or king if it's a men's organization). The members of the organization are wearing masks and costumes that they had on the float prior to the parade. The whole ordeal of introductions takes an hour while guests watch. Then the band comes in and everyone dances until midnight - unless you're a badass and can party til 2:00.

The band last night was "The Molly Ringwalds" from Europe. They plays all 1980's cover songs. It was AWESOME!!! They were dressed like PeeWee Herman, Twisted Sister, and other icons from the 80's. The but dress behind is one of costumes a member had. Most had their faces painted with a mask and lots of bling and rhinestones.

The attire is "costume de rigour" meaning girls wear long dress, but some organizations like this one lets you get away with skimpy dresses (but not two pieces so I had a panel added to center of my dress). Guys are required to wear tails and a WHITE tie. This is a dear friend I ran into (along with his boyfriend - I know, right? All the cuties bat for the other team!). BTW - I came out of my heels but had brought flats for dances. Some had flipflop and a few went barefooted - gross bc there are drinks spilled everywhere.

Each organization member is responsible for selling tickets to her table. She also has to decorate it. Most of the money for membership dues and tickets pays for the ball and parade, but some is often donated to a charity. I'm not a member of an organization and honestly have no desire to be. Like most Mobilians, I go snow skiing and get away from all the tourists during Mardi Gras, but it sure was fun to have a little hometown rivalry last night even as the sober designated driver!

So there's your first hand account of Mardi Gras. Here's the official version:

Mardi Gras is celebrated in Mobile, New Orleans and other Gulf Coast cities. This festive event was started in Mobile and according to some accounts, dates back to 1703. The celebration was originally called Boef Gras (Fat Beef).

The well-known Mardi Gras in Mobile was begun by Michael Krafft. On New Years's Eve, 1830, Krafft and his friends were reluctant to end a dinner party at the customary time. They raided a nearby hardware store, took up rakes, hoes and cowbells and proceeded to wake the town. They soon formed the Cowbellion de Rakin Society, the first of Mobile's many modern mystic organizations. The Cowbellions presented their first parade, complete with floats and theme, in 1840.

The Civil War brought revelry in Mobile to an abrupt halt. Joseph Stillwell Cain, on Fat Tuesday of 1866, donned full Chickasaw Indian regalia, dubbed himself Chief Slacabamorinico. Cain and six friends set out to raise the morale of citizens in the defeated city. Dubbing themselves the "Tea Drinkers", and fired up by drink much stronger than tea, they took to the streets in a decorated coal wagon pulled by a mule. Cain was a founder in the Order of Myths, the organization which today holds the final Carnival Season parade Mardi Gras night. He also helped organize many more parading societies. Cain's role in reviving Mardi Gras is observed each year on the Sunday before Mardi Gras Day, "Joe Cain Day." On "Joe Cain Day" thousands of Mobilians in costume and on individually designed floats parade through the streets of downtown Mobile.

The date of Mardi Gras is determined by the date of Easter. Mardi Gras Day, or "Fat Tuesday," is the Tuesday before the Ash Wednesday which begins the 40 days Lenten season. Nighttime parades and other public festivities begin about 10 days before Mardi Gras Day. Carnival Season balls, receptions and other private functions begin in the fall and continue through Mardi Gras Day.
Reference: http://mobilemardigras.com/history/history.php

Make a Friend Day...open a book 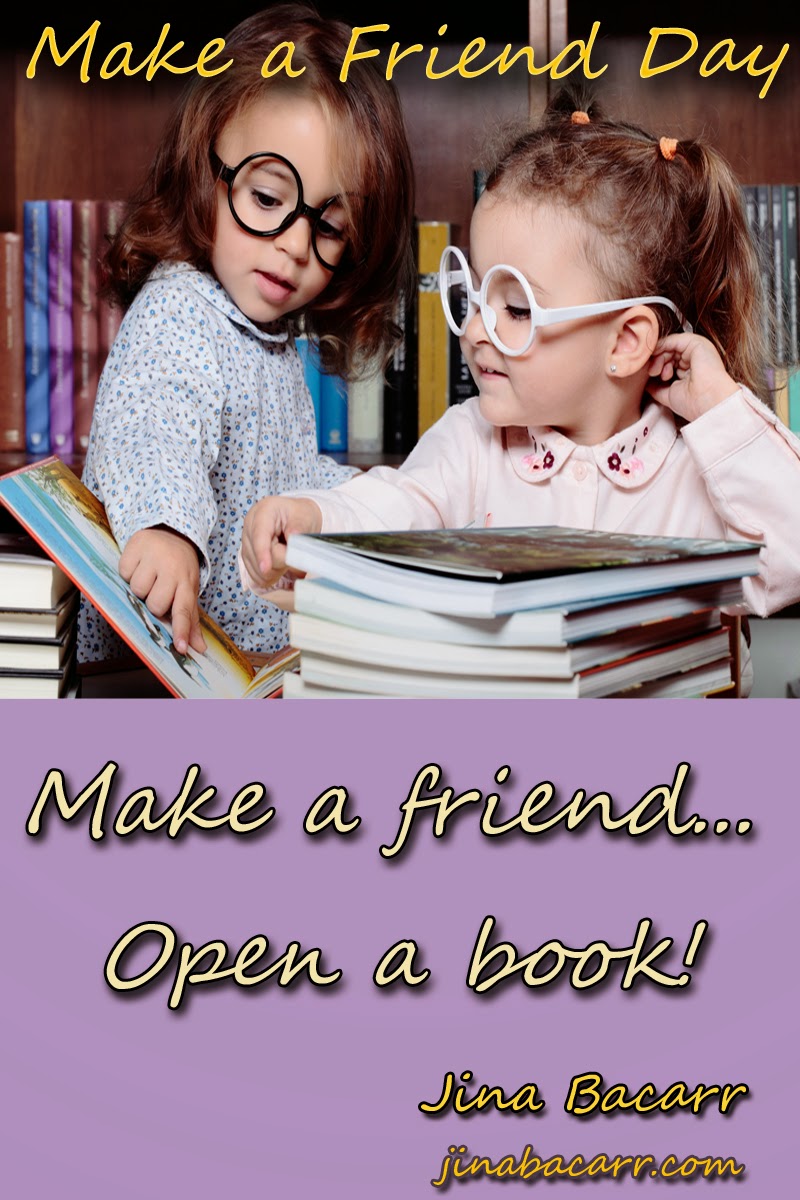 Books have been my friends since I read my first fairytale.

We moved a lot from state to state when I was a kid due to my dad's work, so I was kinda slow making friends.I remember a teacher wrote on my report card, "...works well by herself, is shy and reads a lot."

I was already in my third school.

And I was in the 3rd grade.

Over the years, books are still my friends, but like the little girls in the graphic I put together, it's more fun to share with a friend.

So here's to the Ladies of the Naughty Author Chicks and everyone who stops by to read our stories and posts. I like to think of all of you as my friends. Have a question? Comment? Ask me!

www.jinabacarr.com
Posted by Jina Bacarr at 12:02 AM No comments: