I'm back this week with another video in support of #Literacy Matters. My agency (and Ashlynn's) is hosting an auction with over 80 items to raise money for Literacy Council Gulf Coast. We're giving away books, real Amish quilts, book trailers, critiques, gift baskets and more! Check it out The Seymour Agency 's blog. Let's do all we can to support literacy!

Here's a new video of me being interview to support the event.

Available for PRE-ORDER! SOMETHING ABOUT A MAN IN UNIFORM - Military Menage Boxed Set!

So excited! SOMETHING ABOUT A MAN IN UNIFORM, My Military Menage Boxed Set is Now Available for Pre-Order at Amazon!  Get it today at this special price because it goes up after release day (Nov 11th)!

These four HOT books are all about girl meets hot guys in uniform and immediately falls in lust. And the Marine and Navy Menage Stories are interracial, my first in the subgenre! 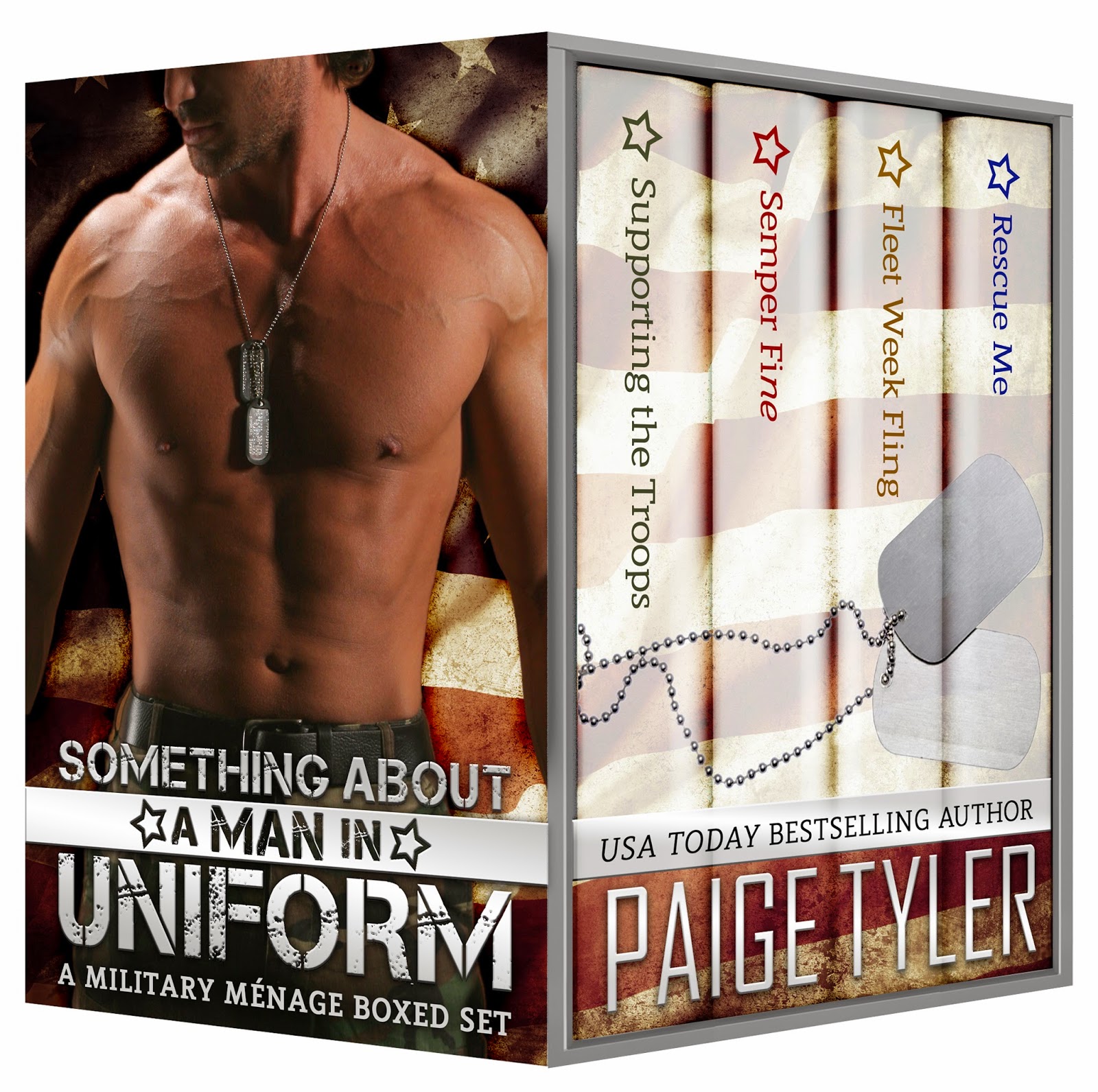 SUPPORTING THE TROOPS – an Army Ménage

Knowing she and her husband Dylan won't be able to make love with his Army buddy, fellow Ranger Carter Erickson arriving the next day and staying with them for two weeks, Shelby Reynolds surprises Dylan by greeting him at the door naked when he comes home from work. Only Dylan isn’t alone. Carter came in a day early and gets an eyeful of her very nude body. While Shelby is embarrassed, she’s also extremely aroused. She loves Dylan like crazy and shouldn’t be fantasizing about other men, especially his best friend. As Shelby gives in to her inner exhibitionist, it turns out that Dylan is just as turned on by the idea of a threesome as she is. After all, if a guy can’t share his wife with his best friend, who can he share her with?

Delaney Shaw is stunned to discover that her high school crush Colt Baxter is the best man at a wedding where she’s the maid of honor. Too shy to ever come on to him back then, she doesn’t intend to make the same mistake now. There’s only one problem. She’s just as attracted to his friend and fellow Marine, Jagger Cruz. Not wanting to come between them, Delaney decides not to make a play for either one. But when it turns out that in between them is exactly where Colt and Jagger want her, she gives in to her desire to be the center of a hunky Marine sandwich.


RESCUE ME – an Air Force Ménage

When Kayleigh Ellis gets stranded in a ditch on the side of the road during a storm, she’s sure that she and her cat are in deep trouble. But luckily Air Force Pararescue Jumpers Austin Fuller and Kyle Larsen show up just in time, giving her and her cat a ride home. Wanting to thank them for their help, Kayleigh invites them to stay for dinner. Austin and Kyle don’t want to put her to any trouble, but she insists. And while the dinner is fun, Austin and Kyle are more interested in dessert, particularly if Kayleigh is on the menu.


Sparkly princess flats
Are where it’s at


But when you want to shine
Stilettos are divine


With you in high heels in jet black or hot red
And nothing else when you go to bed...
==========
Best,
Jina
www.jinabacarr.com
www.facebook.com/JinaBacarr.author
https://twitter.com/JinaBacarr
http://www.pinterest.com/jbacarr
Posted by Jina Bacarr at 12:00 AM No comments:

Thankful for You--Now Available for Pre-Order


Thankful for You releases Nov. 1, but is now available for preorder on Amazon, All Romance e-Books, i-Tunes and Kobo. 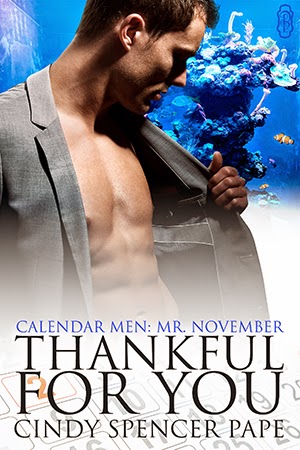 Blurb: Appearing in a benefit calendar may have been the dumbest thing veteran Sig Nowicki ever did. Suddenly, he’s become his small town’s golden boy, and he doesn’t much like being in the spotlight. Mostly he needs a job, now that his military career was ended by a grenade.

Pet shop owner Elsie Jordan came to Michigan to start over. She’s attracted to Sig and doesn’t give a rip about his scars, but the ones she carries inside her heart are the real hurdle. She just isn’t sure she has it in her to love and trust, ever again.

Elsie and Sig set out to boost each other’s confidence and finally give in to their explosive passion. The entire town seems happy to help. But both of them need to come to grips with their imperfections and accept that they might just be perfect for each other.


It had been so long Elsie wasn’t sure she’d remember what to do. Sig’s fingers were deft on her buttons, and he pushed off her jacket with a gentle touch, making her tremble as his hands grazed along her shoulders.
Wanting him to hurry, she reached back and undid the single button on her silk shell and lifted her arms so he could pull it over her head.

The shuddering breath Sig sucked in told Elsie he was as affected as she was.

“Your skin is amazing,” he whispered. “Smooth as satin. You sure you’re okay with seeing my messed-up hide? I can turn the light off.”

“Leave it.” Now she was the aggressor, yanking off his tie and undoing his shirt. Heady with power, she kissed each bit of skin she revealed button by button. “Any scars you have are part of who you are.” Truthfully, she was glad his body wasn’t perfect. His scars would be a constant reminder of who she was with—a good man, one who wouldn’t turn on her the moment his lust was sated.

He shrugged out of his shirt and Elsie stepped back to gaze at him. Yes, there were scars. Her heart broke for the pain he must have suffered, probably still did suffer from time to time. Otherwise, though, he was a damn fine-looking man—muscled without being bulky, with a lean waist and a patch of dark hair on his chest that tapered down to a line disappearing into the waistband of his slacks. She licked her lips and squeezed her thighs together to ease the ache in her core.

“Come here.” His deep growl reverberated in his chest as he pulled her close.

“I’m not going anywhere else.” She laced her fingers through the short, crisp hair, above his heart, and felt it pounding every bit as hard as her own. Moisture soaked her panties and hose and her breasts ached with need.

“Good.” He caught her hair in his hands and kissed her while she rubbed her nipples against his washboard abs, seeking relief. His heavy erection pressed against her stomach.

Elsie wasn’t sure which one of them groaned. It could have been both.

When they came up for air, she slid her hand down the front of his trousers and cupped him. Sig pulsed into her palm, even though his boxers.

Elsie nodded. Taking an unsteady step back, she stripped. He dropped his slacks, pushing off a pair of plain white boxers at the same time. Elsie caught her breath. “Beautiful.” She reached out to trace the thick ridge running the length of his cock. The flared tip pointed straight toward his chest, a small bead of pre-cum already gathered at the slit. She’d never seen a man this aroused. Certainly not for her.

Sig inhaled sharply. “This is going to be over fast if you keep doing that.” He tugged her back into his arms, kissing her until she couldn’t breathe. His tongue plundered her mouth, possessing her with a raw imitation of what was to come next.

Elsie was on fire. She stood on her tiptoes, trying to get his cock lined up against her pussy, feeling every hair on his arms as they brushed her back. The need overwhelmed her senses. She rubbed against him shamelessly, all but begging him to fuck her. He slid a hand between their bodies and closed it around her breast. Elsie’s knees gave out and she sagged into him. Sig lifted her and laid her down on the bed. He spread her legs wide and knelt between them.

“I’ve imagined you like this.” His gravelly voice shook. He ran a finger along the seam of her pussy. “All naked and pink and wet, all for me.”
Posted by Cindy Spencer Pape at 4:30 AM No comments:

Ashlyn Chase here...Yesterday's post and video was from Casey Crow, my agency sibling, (That's what the authors represented by The Seymour Agency call each other.) We're participating in an auction to benefit a literacy charity. ( To auction ) Casey told you about her favorite book from childhood.

Today it's my turn. My video tells of my love of being read to as a child. I won't repeat the story here. I'll just tell you about how this love of listening to my mother or father reading to me translated into my love of audiobooks as an adult.

In 2007, I found myself flat on my back for a solid month after a spinal fusion. I can't tell you how much fun it was to stare at the ceiling fan and wonder how long it had been since I'd dusted it. (Insert sarcastic eyeroll here.) I tried to hold a book over my head, but my arms got tired really fast and the heavy duty pain meds made it hard to concentrate.

Well, rather than letting me go slowly insane, my wonderful husband found out how to sign me up for audiobooks from my state library. These were MP3 files, so he didn't even need to go to the local or state library. He was able to download them onto my laptop from the privacy of our own home. That meant I could browse and choose my own titles too.

I have another link for you. Here's my auction and guess what I'm giving away?


http://seymouragency.blogspot.com/2014/09/auction-item-5-ashlyn-chase-audiobook.html?m=1
Why, it's an MP3 CD of my audiobook Flirting Under a Full Moon! You get the disc so you can download it again and again. Heck, you can become your own lending library! And you won't have to wait for the person to finish listening to it in order to return it to you. The book can be downloaded onto a laptop, PC, phone, iPad, iPod, or any other gizmo that will read to you.

I hope you'll check out the auction, or the literacy foundation nearest you. Let's create a more informed, entertained, and intelligent world!

Posted by Hot Ash Romance Novels at 5:36 AM 2 comments:

My agency (and Ashlynn's) is hosting an auction with over 80 items to raise money for Literacy Council Gulf Coast. We're giving away books, real Amish quilts, book trailers, critiques, gift baskets and more! Check it out The Seymour Agency 's blog. Let's do all we can to support literacy!

Here's a video of me being interview to support the event.

Lipsticks and Men: do they notice?

Lipsticks and Men: do they notice?

About our favorite lipstick shade
That promises not to fade

A man for all seasons
Who has his reasons

When he whispers, “I don’t mean to be rude…
“But I prefer you and your lipstick nude.”

Hope you enjoyed my poem!!

Today I’m wearing Misty Rose by Lancôme….it’s a lovely shade of pink, not too light, not too dark…