I know this is a repeat post but can't have you forgetting about the RT conference!

The Romantic Times Booklovers convention is nearly a month away! Who's going to Dallas with me? It's always a blast catching up with old friends, meeting tons of new writers and readers, and my fav....scoping out the hot cover models. ***happy sigh****

This year I'm honored to be presenting two workshops. This first is "Brand New You". It's a marketing workshop with my Seymour agency sibs Jennifer Fusco and Sparrow Beckett. Jen wrote MARKET OR DIE and has an article in the March issue of Romance Writer's Report. Here's the link in case you missed it.
http://www.omagdigital.com/publication/?i=246056

The other workshop is "Pitch Perfect" with some serious star power. (Not me! LOL). YA author Brenda Drake, Agent Louise Fury and Entangled Publishing CEO Liz Pelletier. Geez, I'm nervous just thinking about sitting at that table! I'll be discussing loglines.

The most important thing I can say about pitching is show enthusiasm! Editor Chris Keeslar says the purpose of the pitch is not to the e/a to ask for it. They are most likely going to do that anyway if you made the effort to attend a conference and it’s remotely marketable. The purpose is to get them excited about reading the book so it doesn’t sit on their desk. You want it to be the first story they get to."
I also want to invite all the RT attendees to the Annual Shooting Stars Gala hosted by The Seymour Agency who represents me and another fellow NAC chick Ashlynn Chase.  Hope to see you there!
Southern Smiles,
Casey Crow

Love Me Forever on Kindle Scout: "God, she was all woman." 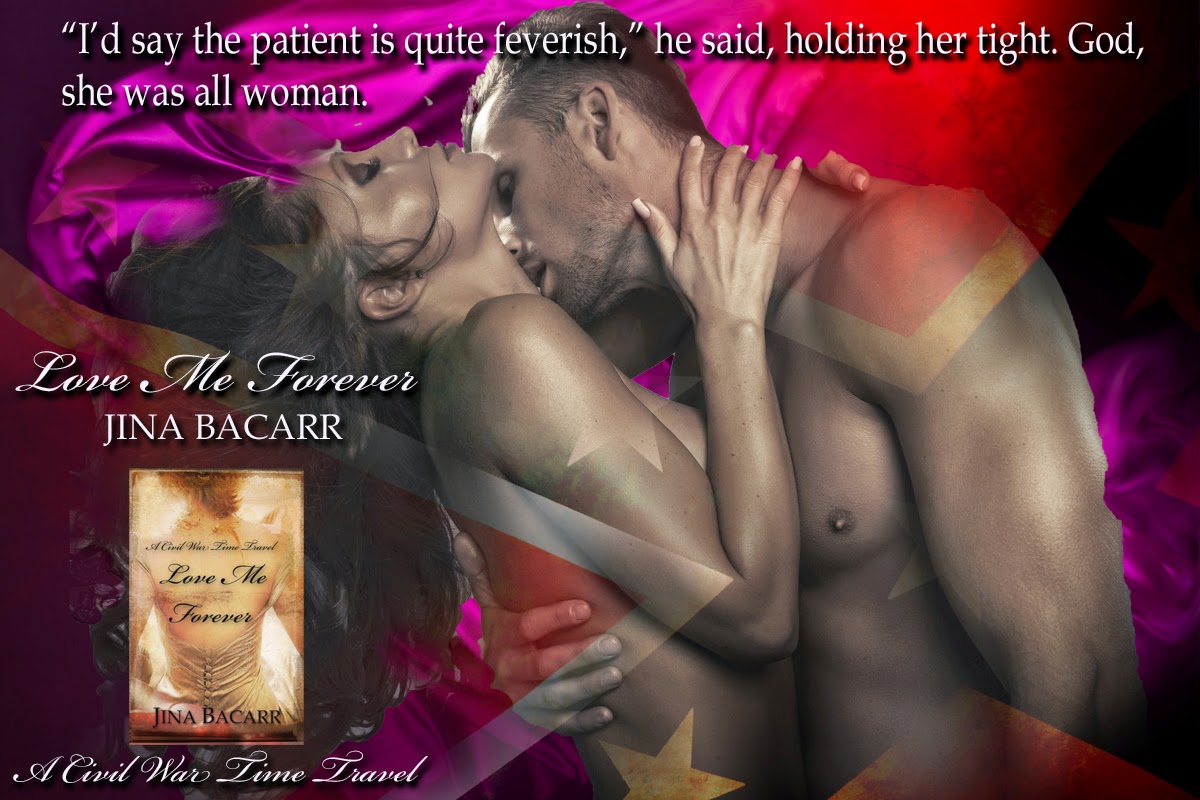 Mmm...I don't know about you, but my temp rises whenever I'm around a hot guy like this...he's the Union Army major in my Civil War time travel, LOVE ME FOREVER

My heroine, Liberty, disguised as a Confederate officer, has traveled back to 1862 and saved the life of a wounded soldier with the bandage in her rented re-enactor uniform.

Confusing the heck out of our hero.

Her medical knowledge intrigues him, but it doesn't take him long to guess there's a gorgeous woman under that uniform...and that's when things really get interesting when Liberty asks him about checking a patient's fever with a thermometer and he tells her his unit doesn’t have one. That the Union Army Medical Corps claimed to have a few of the clinical instruments, but no one bothers to use them.


He tried to forget she was a woman, focusing instead on her medical knowledge that challenged him to question the standard procedures. Ideas that matched his own theory of sanitation. Like keeping the latrines separate from the eating area and washing his instruments in hot water both before and after using them.

“Where are your thermometers?” she asked, checking the items lined up on a bench. Bedpans, folded bandages, a small bowl for washing.

“This unit doesn’t have one, Lieutenant,” Flynt said, clearing his throat. He explained that the Union Army Medical Corps claimed to have a few of the clinical instruments, but no one bothered to use them.

“Then how do you measure fever?” she wanted to know.

“By touching the patient,” he said.

“Yes. Since chills often accompany fever, nothing more is needed.” He laid his hand on her arm and fought to keep his wits about him. She flinched.

“So tell me, Major,” she said, tantalizing him with her voice, “what is your diagnosis?”

“I’d say the patient is quite feverish,” he said, holding her tight. God, she was all woman.

“We have a saying where I come from,” she mumbled, pulling away from him.

“And where do you come from?” Flynt asked, curious.

“A long way from here,” she said slowly.

An honest answer, he gathered. Was it an attempt to keep him from pursuing the fact she was a woman?

Or her deep commitment to her profession?

One part of his mind was telling him to take her in his arms and hold her close to him, while the other, a more practical part, did what his medical training told him to do.

He put her to work.


LOVE ME FOREVER
She wore gray.

But their love defied the boundaries of war.

LOVE ME FOREVER is on Kindle Scout — you can read the first 5,000 words HERE. You’ll meet both my heroines and both my heroes in the excerpt. If you nominate my story and it’s published by Kindle Scout, then you’ll receive a free copy!

It’s a saga of love and romance and war. Believe me, I walked every road, fought every battle with my characters, even walked around in a hoop skirt to “get it right.”

This is a book of the heart…any questions? Please ask!!

If anyone feels like sharing a vote…I’ll be forever grateful!

Thank you for your support...

Civil War Time Travel: What if you met up with your twin...who lived 150 years ago?

We hear so much about how the Civil War was a conflict about brother against brother.

What about the women of the North and South?

In "LOVE ME FOREVER," my story on Kindle Scout, two women with very different beliefs learn to accept each other for who they are.

They’re not only separated by what they believe in, but by more than 150 years when my heroine travels back to 1862.

Here is an excerpt when my heroine, Liberty Jordan, a re-enactor from today disguised as a Confederate officer, meets up with Pauletta Sue Buckingham when Liberty escapes from the clutches of a dastardly sergeant in a Union prison camp. Pauletta Sue sees her dashing across the field and races after her in her buggy and carriage:


“Climb aboard, Lieutenant, it you want to live to fight another day,” the dark-haired woman called out, holding her horse steady with her gloved hands in black net.

“You don’t have to ask me twice, ma’am,” Liberty said, pulling up her collar. Thank God they stopped shooting at her. That didn’t mean she was free.

“Whoa, Savannah Lady, whoa,” the woman murmured to the skittish animal pulling her carriage. She fidgeted with the veil covering her face, straightening her back as if she were struggling with an inner turmoil. Liberty was amazed at her small waist and tight bodice that pulled across her full breasts with a rigid, stiff crackle as she moved. Her full skirts flowed around her like she was a mermaid in an ocean of blue, swimming in their sumptuous depths.

A straw riding bonnet with curved pheasant feathers swaying delicately in the breeze.

“I reckon your horse got spooked from all the noise,” Liberty said in a deep voice, keeping up her soldier act.

“Nonsense,” the woman smirked. “It’s not the first time Savannah Lady and I have outrun the Yankees with bullets flying over our heads.”

God knows what she meant by that.

Liberty looked around, trying to get her bearings. She felt invigorated by the idea of freedom so close she could smell it. Sweet and welcoming, like the fresh scent of her rescuer’s perfume heavy in the air. She smiled. The late afternoon sky blazed a dazzling deep pink overhead, but it would soon dissipate into a dark blue velvet.

Hiding her from the soldiers.

Oh, God, if only she could get away. She’d survive somehow. But even if this woman helped her, where would she go? She had no map, no idea where the road would lead her.

“The whole Union Army’s on my tail, ma’am,” Liberty said, pulling her hat down low to shield her face. “I’d be dead if you hadn’t raced over the hill when you did.”

“You must be brave, sir. The cause needs you,” the woman whispered with urgency, startling Liberty.

So that’s why she helped her. She was a Confederate sympathizer. Here? In a Union camp?

Would they both be shot?

“Hurry, get in,” she ordered. “The bluecoats are coming.”

Holding onto the side of the carriage, Liberty lifted herself up when suddenly she felt her feet give way from underneath her. Damn, she hadn’t counted on the slippery step glistening with dew. It caught her unaware and threw her off balance. She lost her footing on the soggy, wet earth, staggered, then with a loud plop, landed on the ground, the wind knocked out of her.

Her officer’s wide brim hat flying off her head.

Liberty heard the woman gasp when her long reddish-blond hair tumbled down her back like a cascade of corn silk popping up out of its stalk.

“You’re a woman,” the Southerner cried out, her hand going to her mouth.

“Haven’t you ever seen a girl in pants before?” Liberty said, a weak smile curling over her lips. She was surprised the woman didn’t faint.

“Dear Lord, the soldiers mustn’t find out you’re a female,” she said, taking charge. “No telling what they’d do, seeing they have the manners of a country hog.” Holding up her skirts, she climbed out of the carriage to retrieve Liberty’s brim hat.

“Then you won’t give me away?” Liberty asked, surprised. The Southern belle was no pushover.

“You fool girl. I admire what you’re doing, but the Yankees will never understand what we women will do for the cause. Even if we suffer from a broken heart, we’ll never give up,” she said with an emotion so deep it surprised Liberty. She handed her hat back to her. “Run! I’ll hold them off. You can take shelter in the old mill down the road till morning. There’s a secret hiding place behind the pantry.”

How did she know that?

Liberty had no time to ponder the belle and her cause. Instead, she pulled the soggy hat back onto her head and muttered her thanks. She lifted her chin, the sun hitting her cheeks with its fading rays and revealing her face. Before she could pull down the brim of her hat, the woman grabbed her hand.

“Wait,” the dark-haired beauty muttered with surprise. Or was it shock? “Who are you, Missy?”'

“Nobody, ma’am—” Liberty began, her breath catching in her chest when she saw blue-uniformed soldiers on horseback racing toward them, kicking up dust. She had to get out of here, now.

“I demand to know who you are, where you’re from.” The Confederate woman pulled the veil off her face framed by dark hair. “And why you look like me.”

Yes, that's Pauletta Sue on the left and Liberty on the right in the graphic at the top of the page. The two women are twins except for their hair color. Not only are they on opposite sides, but they both vie for the same man...course, I can't tell what happens...but sparks fly and it isn't just on the battlefield...

LOVE ME FOREVER is on Kindle Scout — you can read the first 5,000 words HERE. You’ll meet both my heroines and both my heroes in the excerpt. If you nominate my story and it’s published by Kindle Scout, then you’ll receive a free copy! It’s a saga of love and romance and war. Believe me, I walked every road, fought every battle with my characters, even walked around in a hoop skirt to “get it right.”

This is a book of the heart…any questions? Please ask!!


If anyone feels like sharing a vote…I’ll be forever grateful! LOVE ME FOREVER


PS -- As I post tonight LOVE ME FOREVER is Hot & Trending! 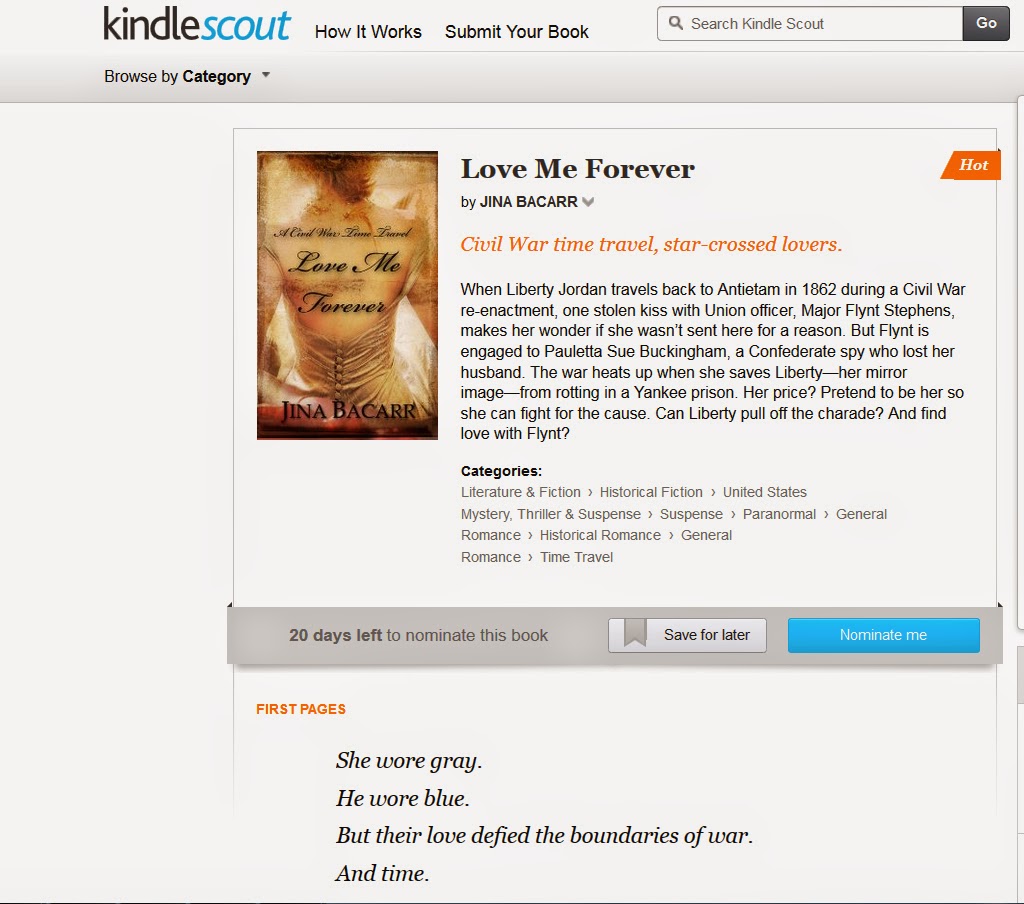