“Tea with My Samurai” Part 2 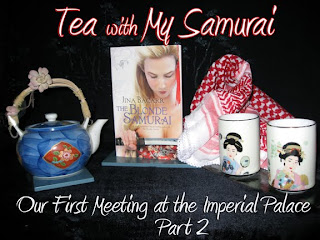 Backstory:
When Lady Carlton--Katie--wrote her memoir, The Blonde Samurai, she inscribed it in first person. But for her own pleasure, she was curious about what Shintaro thought about her, a Western woman who had come to Japan as a virgin bride in 1873.
She decided to find out.


During the late afternoons when a titillating breeze cooled the day and the passing of time stopped for the drinking of tea, Katie and Shintaro sat under the flowering cherry blossoms and warmed their hands around tiny tea cups and talked about their first encounter at the Imperial Palace.
What follows next is the second of three episodes of “Tea with My Samurai,” depicting this scene that appears in Katie’s memoir but instead told from Shintaro’s point of view as he related it to her during their teatime conversations.


Lord Shintaro speaks of the first time he saw Katie outside the emperor’s Imperial Palace in Tokyo (spelled Tokio at that time).
(Katie’s POV of the same scene appears in “The Blonde Samurai” on pages 154-156.)
To read episode one, click here. 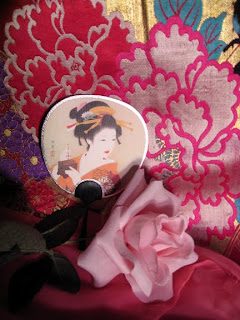 PART 2:
How dare the woman defy him.
Didn’t she know he was samurai?
That he followed a moral path of chivalry carved on the scarred flesh of the warrior class? Unwritten but stronger than words printed upon parchment.
And as a great warrior, he could claim the head of his enemy with a single stroke of his sword. Her head, if he so desired.
A sword he must keep sheathed, he thought. A sword drawn would find its mark, as would his cock if he seduced her with his wit and charm.
Then she would know who was master.
He looked her up and down, thinking.
She also interested him in a manner not ruled by his cock. Bending like bamboo but not breaking. She stood strong like a samurai woman.
And that intrigued him more.
He could see by the look in her light-colored eyes that she was not as frivolous as the wives of the Englishmen he met at court. Fanning themselves and tittering about like noisy crickets. Insipid creatures who were frightened of him and lowered their gaze when he, a proud samurai warrior, walked by them.
This brazen Englishwoman had dared to look directly at him when she encountered him racing through the tall great gate. A gate leading to the pavilion on the grounds of the Imperial Palace.
And she kept looking at him.
He retained his silence in spite of her. As samurai, saying nothing meant more than words. Such was the power of Bushido, he knew, the way of the warrior. A discipline in self-control that was forged since childhood. His deeds of courage--and love-making, if he dared to so acknowledge--were forged from this credo. He was master of his own fate and hers, and would speak when it damn well pleased him.
Still, he was excited by their chance meeting, though he chose to disguise it. He made no move to disengage the lacquered scabbard of his long sword poking what he’d heard called a bustle. He was tempted to rip off the strange silken tail bobbing up and down on her rear end.
It was her pussy he wanted.
"Who do you think you are?" she yelled at him in English, picking up her long skirts and facing him.
By the gods, she was magnificent.
As was the way of his countrymen, he merely smiled. He did not give her any indication he was familiar with her language.
Why spoil the game?
"Not looking where you're going,” she continued. “Like a chicken hawk in search of his prey."
He grunted loudly, his forehead beaded with sweat, his hand still on his sword, but it remained sheathed.
His anger did not. He yelled words at her in his native language never uttered outside the walls of Yoshiwara. Words meant to frighten her by the sheer timber of his voice.
They did not.
She kept her composure, though he noted a slight twitching around her lower lip. He grinned. Her defenses were weakening.
He breathed out, a familiar urge eating at him. The gods would surely condemn him if he proceeded with mindless lust.
That didn’t stop him.
He moved toward her.
I will have her.
And the gods be damned.
To be continued next week…
www.JinaBacarr.com
The Blonde Samurai: She embraced the way of the samurai.
Two swords. Two loves.
“Told from the heroine's first-person point of view, this memoir-style novel is a witty and wonderful story, full of strongly defined characters.”
--Romantic Times Book Reviews 4½ stars Top Pick!
A Fresh Pick of the Day from FreshFiction.com
Posted by Jina Bacarr at 12:02 AM

Love that - great sword metaphor. Great premise of her saying whatever she thinks, not knowing he understands. That's terrific.

Thank you, Michelle. Since we never got to see Shintaro's POV in Katie's memoir, I thought this would be fun.

Wynter, I had fun with the sword metaphor--later when Katie trains to be samurai (as samurai wives and daughters did in those times), she learns how to use a sword to fight Shintaro's enemies. Samurai women were expected to learn how to protect themselves and their homes.

Hi, Jina!
I love reading a man's POV! And what a man Shintaro is! Whew! *fanning myself* She's just as fierce as he is--what chemistry...

"He was tempted to rip off the strange silken tail bobbing up and down on her rear end."

LOL! Love this, and the sword metaphors. Fabulous!

Naima, thank you! When Katie (dressed as a young man) enters the Pleasure Quarters looking for Shintaro, things really get hot!

Dalton--the concept of a "bustle" was totally unknown to the Japanese--esp. at this time, when the fashion of the 1870s called for a very pronounced bustle with many flounces.

Love this bit! Sorry I'm so late commenting, I'm catching up this week. His POV is very hot :)

I just saw your comment, Savannah, glad you're enoying Shintaro's POV. Thank you!