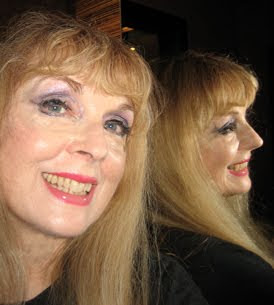 You might say we're Eve White by day and Eve Black at our computers.

Eve who? you ask.

Those are the names of the characters played by Joanne Woodward in the classic black and white film, "The Three Faces of Eve." It's based on the true story of a conservative southern housewife in Augusta, Georgia and the psychiatrist who tries to help her integrate her split personalities.

How easy is it for erotica writers to switch from one personality to another? Does Eve Black whisper in our ear when we're writing those hot ménage scenes or our heroine does a striptease then go back inside us when we head off to soccer practice or do the laundry?

What part of our personality is Eve White?

We all have moments when the story's not working or we get a rejection or we doubt ourselves. That's when we have to work hard to put Eve White back in her place and keep going.

Which brings me to the third persona in the film:

Jane. She's the normal one. The personality who keeps us sane, does our editing, helps us with the plotting and cuts "-ly" words when they get in the way of our story.

But let's go back to Eve Black…

There's a scene in the film with two psychiatrists and Eve where the more experienced doctor thinks she's faking it until he sees a remarkable transformation as Eve changes from her dark personality to her naïve persona--her voice, body posture, mannerisms, thoughts and objectives.
That's what we erotica writers do. We become our sexy selves on paper, wearing those black stockings, pink garter belts and full of mischief…and if you're wondering who wrote this blog post--

Now it's your turn. Do you have an Eve Black personality who helps you write those hot scenes?

Love this post! Eve Black is my Naughty Author Chick;-) I think every woman has a bit of her inside, but only some of us allow her out to play.
The Three Faces of Eve is such an awesome movie - made me a Joanne Woodward fan.

Thankz, Wynter and Savannah! Be sure to check out the link in my post with the scene from the film--it's very compelling!

What a fantastic post, Jina! You are spot-on with your analogy. (Though I'll admit that the people who know me best would probably say I don't have a "normal, Jane" side! LOL)

Looking forward to your upcoming release!

Thankz, Calista!! I think we all have a little Eve Black inside us. It's fun to let her out when we write and see what happens...